I received my Raspberry PI yesterday, installed Raspbian OS 32 bit and installed Openmediavault and attached the 14TB Western Digital hard drive. I need few clarifications about assigning a static IP to the Raspberry PI. My questions are below:

I don’t know about Jay but I would recommend setting a static IP on the router first. By reserving that IP this should take that particular IP out of the DHCP pool and prevent a possible conflict. Most routers are smart enough to prevent this, as small of a chance as this is, it could happen. It couldn’t hurt to set the static IP on the PI too. That would give you a rock solid IP set up.

For the backup solution, only you can answer whether or not OMV on the PI is good enough. It will definitely back up your data, but from what I understand, it will generally be limited by the speed of your USB transfer speed. There is absolutely nothing wrong with that, just might be slower write speed. One of the major benefits of a NAS box is that you can use a hard drive(s) without need of an encosure or usb connection or additional power supply. They are an all in one box versus the several devices that you will have with the pi.

You might also hear about redundancies as a benefit of the NAS boxes as well. But both your OMV and those NAS boxes are capable of this. If you have 2 or more hard drives (USB or otherwise) you can set up a RAID array. With a RAID1 array, this mirrors the hard drives so that you effectively have 2 backups so that if one of your hard drives fail you don’t lose your data. It will also effectively double the bandwidth of your read speeds because it can simultaneously read from both drives at once. This would be particularly handy for your usb drives, especially if they are usb 2.0.

But the biggest question is whether or not you want to spend the extra dough. The PI is a great little starter NAS solution. You’ll get your backup. Might not be as fast but it’ll be just as good. You’ll also have the benefit that, depending on the file system you use, you can connect the external drive directly to another PC if you want.

I would too recommend setting it from your router. This way, if you install a different operating system on your Pi and boot it up your Pi’s IP won’t change. Your router would recognize the MAC address of your Pi and set its IP to whatever IP you specified.

I have a question about my RPi NAS setup.

I have a RPi 4gb with 1tb m.2 ssd and 4tb usb3 external (yes it’s self powered but it’s also connected to a powered hub) running OMV, and all that connected via ethernet to AX router (ATT modem/router).

I am doing a speed test transferring from my laptop connected on wifi to the RPi and back. I get about 7MBps write and 29MBps read. 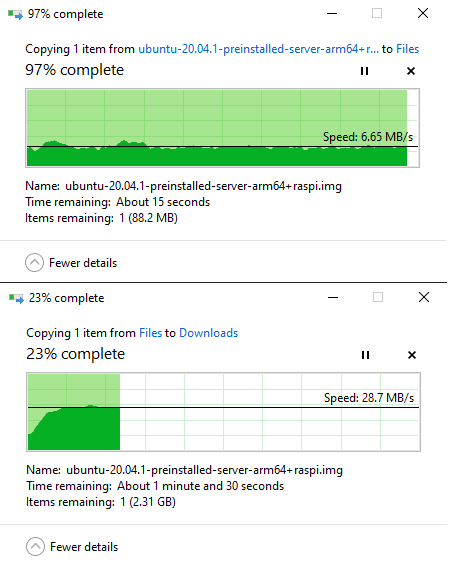 I am confused why I get such slow speeds.

However, it seems like the write speed to the Pi is quite slow.

Try and run a speed test on your disks on the Pi.

Write speed: (/path/on/disk is mounted path on the disk you want to test - the first writes 0’s the other writes random data)

Is the NVME drive using the USB bus?