How-to Copy-Paste into the Ubuntu-for-Server Terminal?

I have been searching for a way to copy-paste from my host system into a VMWare guest running Ubuntu-for-Server.

I’ve Google Fu’d for a few hours and tried various things that I have found online, but none of them have worked:

Based upon this discussion at Stack Overflow (which goes sideways and on tangents unrelated to the original question):

Copy Paste Command in Text Based Linux Server (No GUI)

Anyone have suggestions that I might explore to make copy-paste work in Ubuntu-for-Sever ?

I gave bad advice on this one originally. Best option I can offer is to use SSH.

I have bidirectional clipboard enabled in VMWare. It is auto-enabled by default in VMWare tools. Actually, there is no copy-paste that works with Virtualbox either when attempting to copy-paste from the host into the Ubuntu-for-Server virtual machine.

Its working for me in VBox. Granted, this is a Desktop Guest. I can load up a server and check it out also. 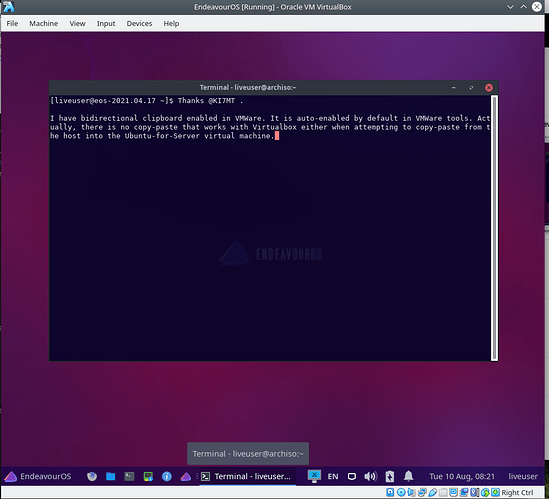 Well, @runlinux.run, I stand corrected. It used to work fairly easy, but not any more, or at least it’s not working in UB server. It would appear one needs an Xserver running, and that’s just a non-starter for me on a server. Even their documentation says is should work: Guest Additions

So, sorry for the mis-lead on that one. I guess the next best option is just to use SSH.

And I can confirm, once you install a desktop of any sort, copy and paste works as they say is should. What a Zoo that is.

I still would not do that just for C&P functions. I would SSH to the box, but, that’s up to the individual I suppose.

I’m certain this functionality worked in the past, but, I dang sure can’t get it working now.

I’ve never had an issue with in Virtualbox. It can be disabled, so maybe check that. But, when it enabled it works bi-bidirectionally.

Out of curiosity, which desktop did you install in UbfS ?

I installed Xfce, but I also installed a bunch of other junk before getting to that point (without success). I’ll do another default install and see what the min packages are.

Note : This is how I do it. There are definitely more, and probably better, ways of accomplishing this. This method works for me so I use it, YMMV.

This is a lot of work for something that can be done via SSH, and probably should be for strict server use. I chose Xubuntu-Core as it’s “supposed” to be the lightest weight version of XFce packaged by Ubuntu.

At this point, and after reboot, you should see the display manager rather than the console. I log in and install Guest additions. On the VM menu under Device, select Install Guest Additions CD image…

You should see the CD appear on the desktop.

Once you log back in the second time, you should be able to Copy and Paste. That’s a lot of pain that SSH can do away with. 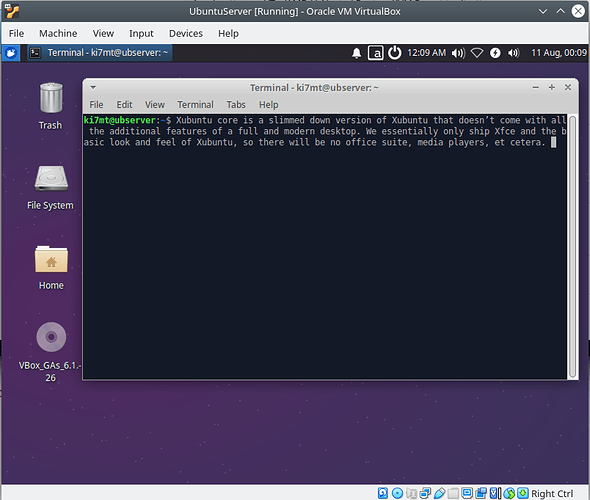 I almost forgot the most important part, installing neofetch 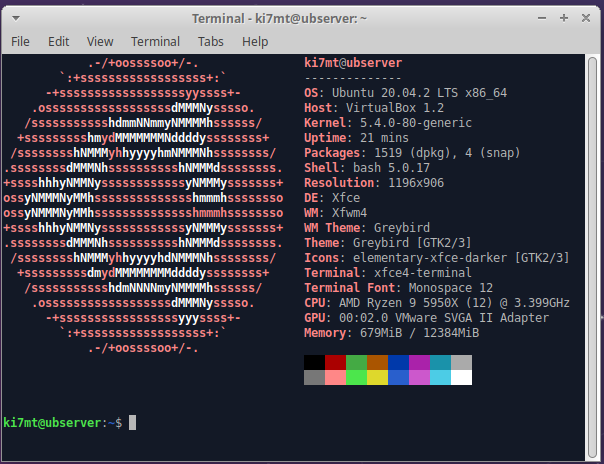 I agree it is a hassle for most people, but when learning there have been instances where copy-paste would save me a lot of time.