This is a really nice update; the newer kernel should make it lots easier for people to install on newer hardware. \o/
All the other package updates are welcome too.

Upgraded a test VM just to try it out; so far so good! \o/

Proxmox 7.0 was release back in July I think it was. It’s also using Bullseye. It’s been pretty good thus far.

I’m downloading the ISO now to check it out.

I wonder if this is what they were waiting on to release 64-bit Raspberry Pi OS officially.

Hmmm, don’t know. It would make sense to do that if you’re distro is following the Debian Stable repos.

The Graphical installer went really smooth. I had to add some repositories though as I don’t use the CD set normally.

Guest Additions installed without issue, and seems to be working well with KDE Plasma. I don’t know why, but I’ve kinda lost favor with Gnome these days. 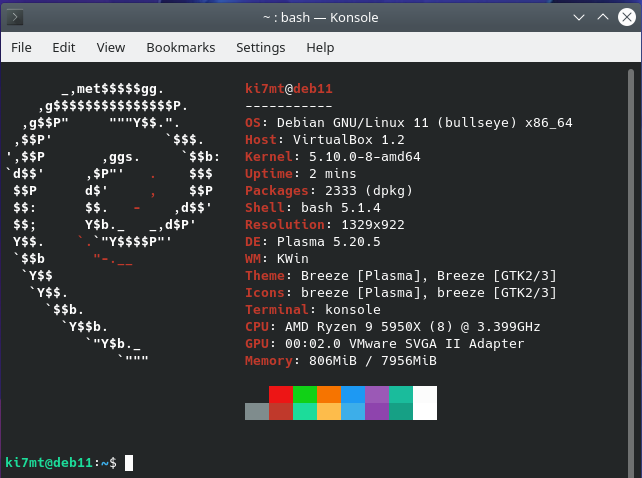 I was reading more of the documentation and I saw that they have a special education release that is basically meant to bootstrap a whole school: Debian -- News -- Debian Edu / Skolelinux Bullseye — a complete Linux solution for your school

Wouldn’t it be great if schools were using this and recycling perfectly good PCs that would otherwise end up as e-waste? They could even use it to help teach their computer classes too. Way better than wasting tons of money on iPads and all that, I think. And then if they had the chance to build Raspberry Pi tablets or laptops, they could learn even more and save even more.

Ubuntu had a spin-off edition called EDUbuntu. I liked that distro, as it had alot of useful apps in it but the maintainers moved on to other things.

At one point, I read that one or more countries in Europe adopted Linux as their main desktop infrastructure. I think it was Spain and Germany, but, don’t quote me on that. The economic drive for it is as you you stated, hardware requirements / costs were a fraction of what they were under a full Windows implementation, not to mention licensing.

With the virtualization technology we have today, Linux is positioned well for any sort of mass deployment. Industries just have to break their addiction to the MS suite of tools.