Making progress on the homelab

Since coming across this channel, I have made a few minor improvements to my ‘accidental home lab.’

Edit: I am a Mechanical engineer so network work infrastructure is not where I normally play:)

@dfarning this sounds like an amazing use of your home lab. We would love to see pics of your newly organized cabling set up. I’m looking to do something similar over this summer as we upgrade our patched together network at work if the funding becomes available.

Still waiting for the patch panel to arrive. They were back-ordered. I’ll post a few pics.

My setup is certainly nothing special, but it might be a good example of how even a relatively low-cost set of hardware can make a good lab setup.

I suggest looking into a label printer if you are a maker or hobbyist. With a couple of ten packs of Sterilite clear plastic shoe boxes, you can set up an organization system on the cheap. I much enjoy tinkering to rummaging through old cardboard boxes looking for parts… I just thought of that as printed up a “Network, Patch Panel” label and dumped the parts that had arrived into a bin while I waited for the last parts to arrive.

I added a Pi 3 to my home lab this morning. The Nvidia jetsons are a little quirky. I thought I would create my initial SBC ansible plays with a more common Pi and then modify them to work with the jetsons. The Pi used to be my octoprint server until I moved octoprint to a docker container on the NAS. 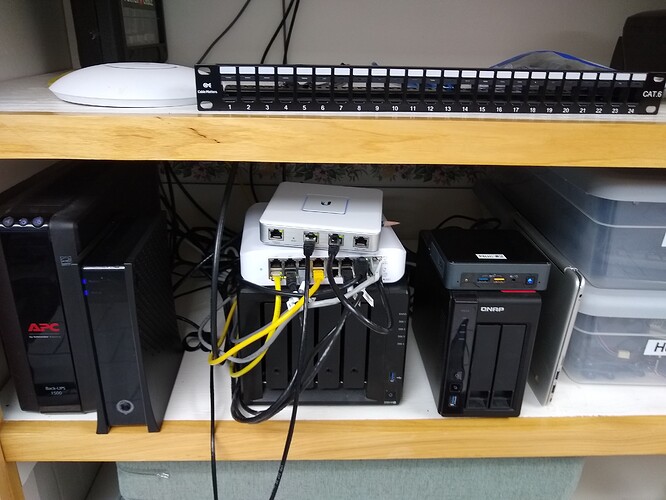 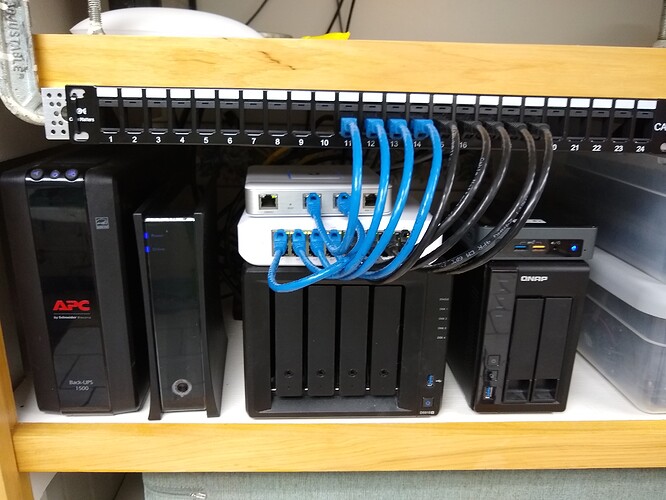 Please don’t mine the C-clamps holding the patch panel in place. When I get octprint set back up I’ll print some 3-d brackets to mount the panel to the bottom of the shelf.

I think I’ll spend my June budget on a 512 GB M.2 SSD to replace the 265 GB that is already in the NUC. If I have time, I’ll also print a extend base for the NUC so that I can add a 512 GB 2.5 inch hard I pulled from an old laptop. Do everything across a 1 Gbps network is pretty slow.

The old M.2 SSD will go in the Synology as write cache.

It is possible to get a working setup with a pretty small budget.

For full disclosure… The mass of wires behind the stuff is a horrible mess. Six different power bricks that need to be tided up.

That’s awesome! I love seeing Homelab pics, thanks for sharing. Good job on the cabling too, most people don’t think to buy cables of the exact length they need, so you’re ahead of the game there. It looks clean.